Robert played a substantial role in overturning a wrongful expulsion of a student of color by a large charter school corporation by successfully arguing for a petition for writ of mandate in the Stanley Mosk Courthouse. 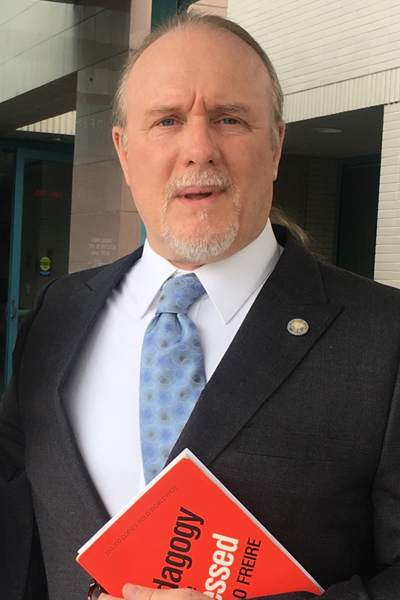 Robert Skeels was a longtime public education advocate and activist before deciding later in life to return to school and become an educational rights attorney.

Robert holds a BA in Classical Civilization from the University of California at Los Angeles (UCLA), a JD from Peoples College of Law (PCL), and passed the California Bar Exam on his first attempt in July 2018. He was sworn in as an attorney in June of 2019.

As a part-time Associate Attorney at the Law Offices of Hirji and Chau, LLP, Robert often assists the other attorneys with various tasks. Robert helps with both civil and special education matters. He frequently aides with California Public Records Act requests. Robert played a substantial role in overturning a wrongful expulsion of a student of color by a large charter school corporation by successfully arguing for a petition for writ of mandate in the Stanley Mosk Courthouse.

Prior to being hired as a part-time associate, Robert interned as a Law Clerk at the Law Offices of Hirji and Chau, LLP.

A student of Paulo Freire and Critical Pedagogy, Robert has always been a firm believer in education as a liberating force. He is currently an Adjunct Instructor of 1L Contracts at the Peoples College of Law. Robert’s published works on education include “The Non-Profit Industrial Complex’s Role in Imposing Neoliberalism on Public Education”, a paper originally requested and juried by the Association of Raza Educators for their journal Regeneración.

Robert was a committed volunteer for of a number of grassroots education organizations including Coalition for Educational Justice (CEJ), Jackie Goldberg’s Transparency, Equity, and Accountability in Charter Schools (TEAch), Public Education and Social Justice Advocacy (PESJA), The Trinational Coalition To Defend Public Education, and the Association of Raza Educators (ARE). Robert volunteered ten hours a week teaching life and literacy skills to residents at the Mary Lind Foundation for 15 years. He also taught Catechism at St. Teresa of Avila Church for 12 years. In 2013 Robert ran for the Los Angeles United School District (LAUSD) School Board against a billionaire funded corporate reform candidate. He finished second in a field of five, with over 5,200 votes.